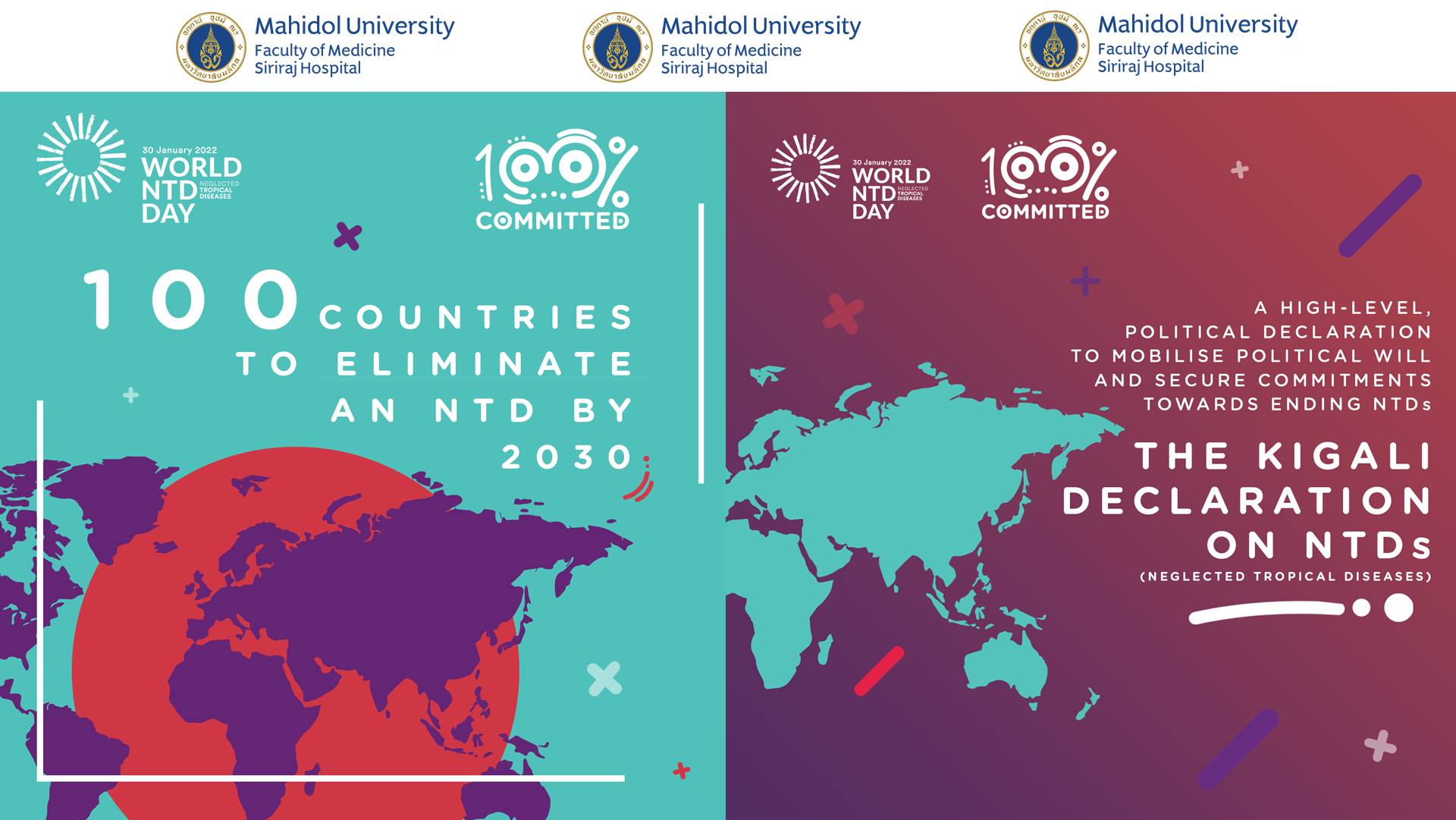 Faculty of Medicine Siriraj Hospital, Mahidol University, was selected as a representative of Thailand to join the campaign “World NTD Day” with other 26 countries worldwide for two consecutive years. World NTD Day serves as a catalyst to translate awareness into action, secure increased resources for neglected tropical diseases or NTDs, a group of 20 preventable and treatable diseases that place a heavy burden on over 1.7 billion people around the world! Each year, the medical and public health personnel around the world were working extremely hard to prevent the death of millions of people who are currently at risk!

January 30th of every year was designated as “World NTD Day (Neglected Tropical Disease)”, the day that all medical communities around the world will raise awareness to end tropical diseases such as dengue, tuberculosis, malaria, filariasis, cholera, fluke, and many other diseases. NTDs cause immeasurable suffering to 1.7 billion of the most vulnerable people in the world who often live in remote communities! NTDs create cycles of poverty and cost developing nations billions of dollars every year!

As one of the main organizers of the NTD Day 2022 campaign, the Faculty of Medicine Siriraj Hospital join with other 26 countries such as Japan, Korea, China, Thailand, Malaysia, UAE, Saudi Arabia, Jordan, Egypt, Kenya, Rwanda, the Democratic Republic of the Congo, Niger, Italy, Switzerland, Germany, etc., to eliminate the NTDs. Siriraj recently organized an awareness campaign week between January 24th – 28th, 2022, focusing on the dengue virus, a common fever in Thailand. The event consists of a dengue exhibition, a doctor consultation via telemedicine, a video presentation about DNDi (Drug for Neglected Diseases Initiative), and World NTD Day – dengue fever, including an interview clip of the infectious disease specialists providing a guide to preventing the dengue.

Another activity is the “one in five social media challenge” campaign. Everyone writes “NTD” on their index finger to remind everyone that one-fifth of the world’s population is suffering from NTDs and the world community will unite to take action to end the NTDs!

Lastly, on January 30th, 2022, there will be a laser show with the symbolic color of the World NTD Day (purple and orange) on the 84th Anniversary Nawamindra Bopitr Building, Siriraj Hospital, along with all participating countries around the world!